Your Guide to the JFK Canarsie Approach

Introduction
We’ve all heard of JFK. Probably the most well-known airport in the world along with LAX and LHR. Many people wouldn’t think that a major international airport has difficult approaches and turns. However, JFK does have an interesting approach to two of its runways - the Canarsie Visual Approach. It involves a steep turn (especially 13R) on final, at an altitude of barely 800 feet above ground level. The question is, why would such an airport have this challenging approach, when there is no high terrain obstructing the final approach path? Also, there happens to be an ILS for 13L, so why not bother to use the good old 15-20nm straight in approach? I will cover this in detail later on.

History
There are three airports very close to each other in the area (KJFK, John F Kennedy; KLGA, La Guardia; KEWR, Newark Liberty.) A straight in approach to 13L using the ILS wouldn’t make sense as it will intersect the LGA airspace, making insufficient separation a problem. That’s why, in the 1970s, the Canarsie Visual was ‘invented’, requiring pilots to come in from the south west, overflying the Canarsie VOR and turning to either 13L or R on short final.

Flying Guide
Here comes the real part: the flying. This handy and easy-to-read chart for the approach is essential for a successful landing. I will explain every part of it to make things clear though! 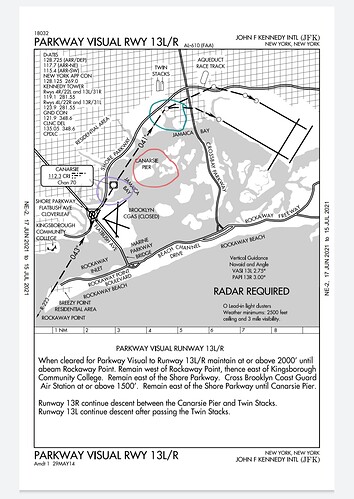 Now you can see that I circled three points on the chart: the VOR, Canarsie Pier and just south of the Twin Stacks. Those are the most important parts of the approach, which I will explain here.

Edit: R-223 is the outbound radial, when tracking outbound from Canarsie which is not the case for this approach.

Here is where it gets a bit complicated:

Remarks
When winds are from the east 13L is mostly used for landing and 13R for take-off. However during less busy hours DL and other airlines that use T1/2/4 prefer to use 13R for landing (if ATC allows that) because of reduced taxi times. Also the weather minimums for the Canarsie Visual are 3sm visibility and 2500’ ceiling, so if weather conditions do not meet requirements do not attempt the approach.

Overall it is a fun and challenging approach, I definitely recommend you to try it out!

I hope you found this useful and thanks for reading!

P. S. I didn’t make a full airport tutorial intentionally because I want each topic to be as focused on its specific purpose as possible.

This topic was automatically closed after 90 days. New replies are no longer allowed.