I do the spotting thing - Denver and Fresno Spotting, June 16th

Hi kids of the WFC, i’ve decided to provide a (for now) WFC exclusive topic of my big spotting trip to Denver and Fresno on the 16th. Enjoy!

Starting off the session was a visit to DEN’s new B West spotting deck, as an add-on to the new 6-gate extension completed recently. Last time I flew from DEN (and overall) in September of 2018 it was not here. It was nice to see a bit of action here before a runway change.

Picture number one features one of DEN’s smaller airlines, being it Denver Air Connection, who operates a fleet of Dornier 328JETs, Embraer E145s, and Swearingen Metroliners to a handful of destinations from DEN. This Dornier 328JET, registered as N677DC and still wearing the livery of it’s previous owner, Caspiy Airlines, was operating “Key Lime 5408” from Clovis, New Mexico. 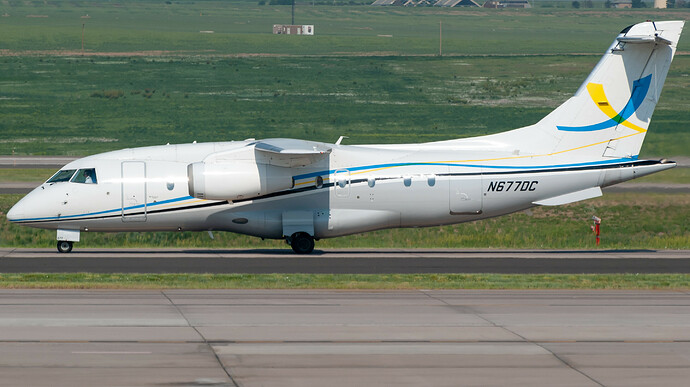 image2780×1564 703 KB
Photo three is an example of one of Frontier’s moderately-sized fleet of Airbus A321s, with them being operated on all sorts of routes. This one, registered as N705FR and given the name of “Ferndale the Pygmy Owl” is seen on taxi after arrival from Las Vegas as “Frontier Flight 770” 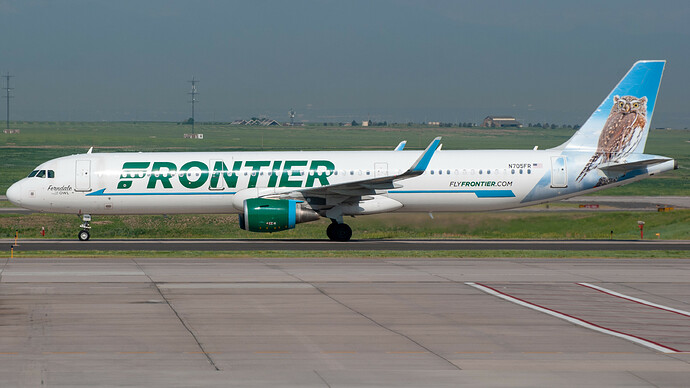 image3331×1874 1.03 MB
Photo four involves one of the oldest Boeing 737NG’s out there, still with Southwest since early 1999. N725SW operated “Southwest 740” down to San Jose Del Cabo, probably carrying a plane full of partygoers, and still sports the classic “Canyon Blue” livery. 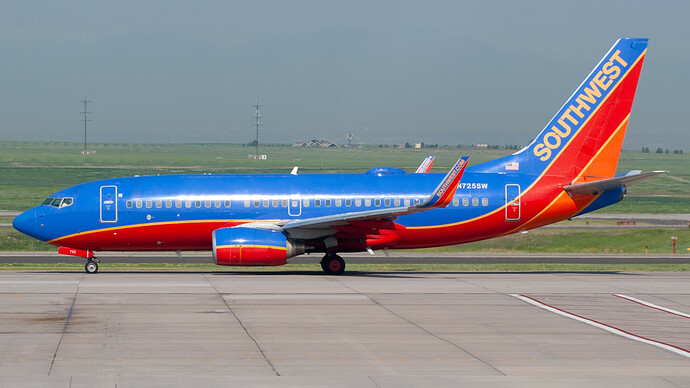 image2167×1219 523 KB
Next up is another Canyon Blue 737-700, but this time being much younger and having split scimitars. Registered as N254WN, it was also heading southbound, but only to Albuquerque as “Southwest 1877” 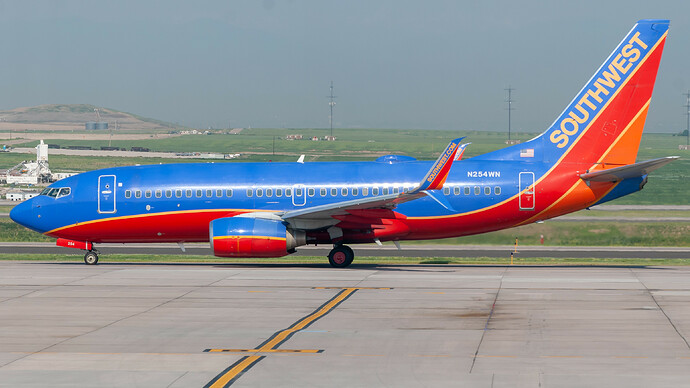 image3110×1749 819 KB
Denver basically has two zoos, with one being the one closer to downtown and the one being 25 miles from downtown. I seem to prefer this one, as it smells better, and they have planes. Frontier’s Denver hub on the south side of Concourse A wasn’t as big as it used to be, especially in comparison to the early 2010’s, but the animals still provide good variety. Featured here are three animals. Closest to furthest is “Wilbur the White-Tail”, then “Seymour the Walrus”, and finally “Montana the Elk”. Wilbur is Frontier’s first A320NEO, delivered back in 2016, Seymour is one of Frontier’s A321 fleet, and Montana is one of the few remaining A320ceo’s left, even rarer that it’s in the old livery. Wilbur was operating “Frontier Flight 474” to Jacksonville, Seymour was operating “Frontier Flight 571” to Salt Lake City, then Montana was operating “Frontier Flight 386” to San Antonio. 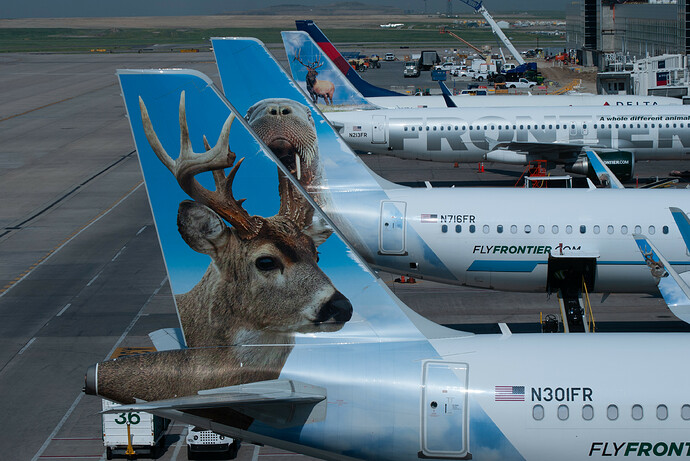 image3601×2411 1.71 MB
After leaving Concourse A, I moved to my gate in Concourse C to catch my inbound Southwest flight on it’s taxi in from San Diego. Today’s ride over to Fresno was N7740A, a 14-year old 737-700 formerly spending time with AirTran. Here she is, in all of her canyon blue glory, pulling up to C42 after arriving as “Southwest 1999” 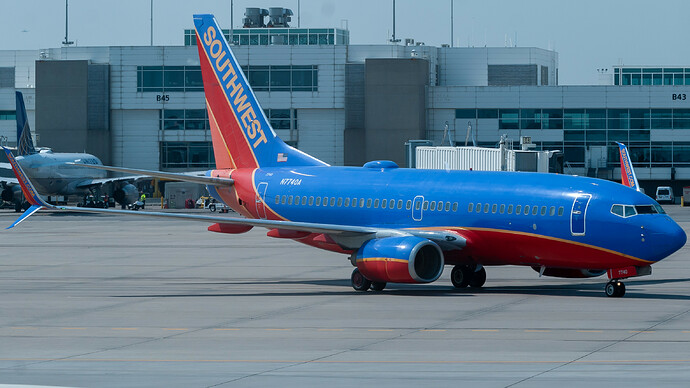 image3057×1720 976 KB
After a delayed arrival into Fresno, I was able to catch a handful of planes, but Fresno is a much smaller airport than Denver.

First from Fresno is a United CRJ-200 sporting United’s new “Evo Blue” livery, registered as N889AS. It arrived from LAX as “Skywest 5619”. 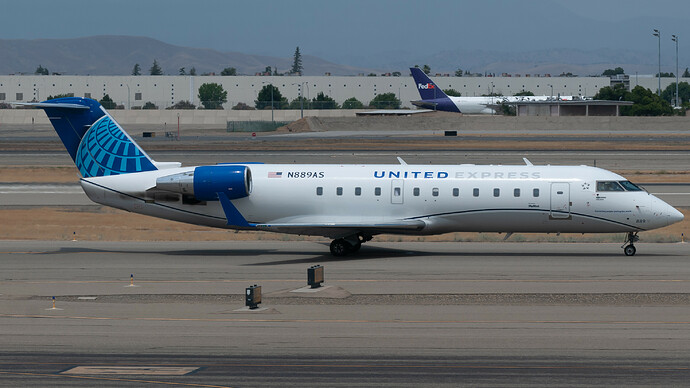 image2937×1652 786 KB
Following that is a larger regional, also belonging to Skywest, but arriving from the other large and famous California city, San Francisco, as “Skywest 5537” and being an E175 registered as N140SY. 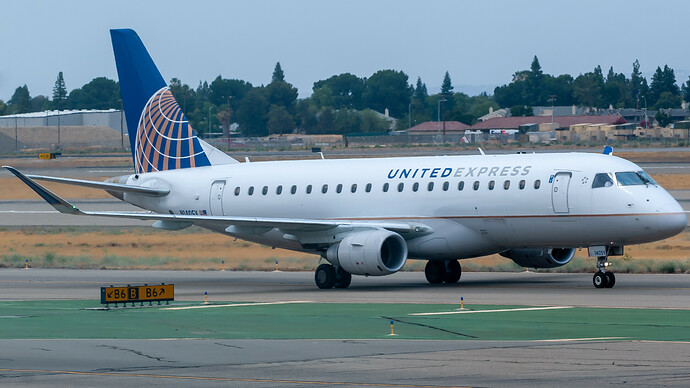 image2633×1481 647 KB
Finally, to wrap this all off, is Frontier’s last A319 and the sole reason I decided to take this trip. Frontier will have this one retired by the end of September, so I wanted to catch one last ride on this iconic type of aircraft. I’ve flown 3 of these and I’m glad to say I was able to get my 4th ride on this type of aircraft (unique tails, I duplicated a tail in 2011 and 2015). There was a lot of nostalgia flying on this aircraft, and the experience overall was not too bad. Today’s ride back to Denver was N949FR, or “Erma the Ermine”, almost 15 years old, and was taxiing to gate 15 after arrival from Denver as “Frontier Flight 495” 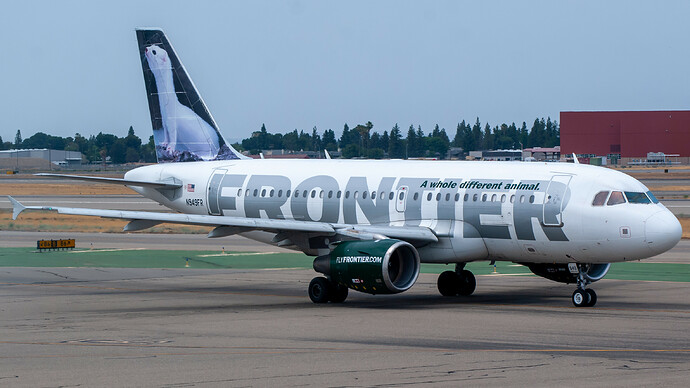 and that’s all from me kids, enjoy these spotting photo plane things.