A Complete Guide to the A320 Family in Infinite Flight

The A320 is one of the most popular jet airliners ever built, and as a result, it is featured in almost every flight simulator on the market. In this tutorial you will find the plane’s flying guide and performance characteristics. I hope you will find it useful!

The A320ceo Family - A Technical Overview

The A320 has a relatively easy-to-understand cockpit, so I believe this tutorial will cover the essential aspects of the flight deck which are essential for flying.

Autopilot panel. For now, there are no mode indicator lights for the A320 AP (unless it gets reworked again later on.)

SPD - speed, IAS below FL280. Above that it will switch to Mach speed and whatever you do, fly it below the MMO. 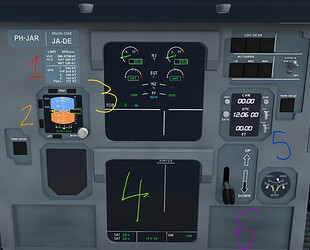 Centre Pedestal and Surroundings - A320

2,3. A320 MCDU (Multi-Function control and display unit), works along with FMS.

A320 Family Takeoff and Landing Profiles

I have put together a little table of the V-speeds for the entire A320 family here for both takeoff and landing.

Approach and Landing Speeds - A320 family.

Other Useful Tips for Flying the A320 Family:

So I guess that’s it for today, and I hope you enjoyed it!

I apologise, I did do this on a computer this time, I didn’t press the button accidentally, it’s just that Discourse was glitched or something and it created the topic for no reason when it isn’t finished yet.

I’m trying to finish it off now.

I think it’s too long, maybe separate the other info after the pedestal into a reply?

Will do! For the meantime I am going to continue working on the takeoff and landing profiles, and separate the pedestal info after all that. Thanks for your patience

There are five main flap positions: 0, 1, 2, 3 and Full. However, there is actually one more called ‘1+F’ in a real A320. What it means is that, due to the A320’s design, ‘Flaps 1’ when extended in the air (for example during approaches) only extends the slats. Nevertheless, there’s more to it. When ‘flaps 1’ are extended during takeoff, the aircraft is actually running the flaps on 1+F because both the slats and flaps are extended. (The ‘F’ means ‘flaps’, hence 1 (slats) + F (flaps).) There is no true ‘1’ position in IF, because whenever you select ‘1’ the flaps always come down along with the slats, meaning that it is more of a ‘1+F’

Glad that you liked it! Thanks!

This topic was automatically closed after 90 days. New replies are no longer allowed.